Home / sport / Downpours, forensic analysis and lots of pasta: on the team bus at the cycling worlds

Adecade ago, Cadel Evans became the first Australian to win the pinnacle one-day race on the international cycling calendar: the UCI Road World Championships road race. Last week, Canberra’s Michael Matthews travelled to Yorkshire hoping to replicate that feat, having placed second in 2015 and third in 2017.

Treacherous English conditions turned the race into an epic, pushing the best riders in the world to breaking point. As Matthews and his seven Australian teammates fought for the rainbow jersey, Guardian Australia was along for the ride.

Australia’s technical director Brad McGee is holding court. In the lounge room of a grand rural residence converted into a rehabilitation centre for police, but occupied this week by several national teams, the Australian riders have gathered. A television screen in the corner shows a weather map, with heavy rain forecast. “Will I need a raft?” quips time trial world champion Rohan Dennis.

The banter stops as a late-arriving team member is chastised. The mood instantly switches, with McGee’s expression becoming stern. “Boys,” begins the former Olympic gold medallist. “Our objective is to win.” Over the next hour and a half, McGee, performance director Simon Jones, technical analyst Dr Eric Haakonssen and Australia’s eight riders forensically dissect the 285kms standing between them and glory. “Our ideal scenario is Michael Matthews sprinting to victory with seven guys leading him out,” says McGee. He pauses, and then chuckles: “That might not happen.” 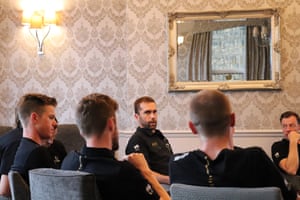 Matthews is among the favourites, after recently outsprinting the other primary contenders in Canada. The Australians want to control the race from the start, and Dennis is told to ride hard on the front. “We’re going for the Team Sky look,” says Mitch Docker; the British outfit was infamous for its conspicuous dominance of the peloton. “It is important, visually,” he adds.

The discussion is lively, each rider offering their perspective and occasionally injecting humour. A major concern is information – unlike World Tour racing, national teams are not permitted to communicate by radio. Instead, Australia are deploying a traffic light system: at each feeding opportunity, staff members handing out bottles will wear coloured strips of material. Green means “all good”, yellow is an instruction to “be careful” and red indicates “crisis”, McGee explains.

Once the tactics are agreed, each rider is asked to summarise their role. Nathan Haas, Jack Haig and Simon Clarke are Matthews’ key lieutenants – it is imperative all three are still in play late in the race. “It is going to be us eight guys against 200,” says Haas. Focus eventually turns to Matthews, who has remained mostly silent. “Behind us will be mayhem,” he says. “I need all of you. It is going to be war.”

The team rises early, with breakfast – toast, cereal, eggs and yet more pasta – served from 5.30am. The mood is subdued, with the riders mentally preparing for the toughest day of their season. As the bus departs for the start-line, word arrives that heavy rain overnight has necessitated a significant course change. Several climbs have been removed, with two additional laps of the final circuit around Harrogate added.

“I think this is better,” Haas says. “It is a race we can control.” The others seem indifferent, although a few grumble about technical difficulties trying to update the course on their on-bike race computers. Once the commotion subsides, the riders return to their individual preparations – adding numbers to their kits, cleaning cleats, imbibing espressos from the bus’s coffee machine. Matthews speaks to his wife on FaceTime; Haig consults Haas about apartment renovation plans in Andorra.

The bus is greeted in Leeds by several family members – team captain Rory Sutherland’s two children have brought along an inflatable boxing kangaroo, wearing a world champion’s jersey. Technical director Jones, a Briton who has been credited with overhauling Australian cycling since joining from Team Sky, is delighted by the kangaroo and disappears with it onto the bus.

The team’s support staff, all employees of Australian-registered World Tour team Mitchelton-Scott, busy themselves preparing bikes, bottles and nutritional supplies. Mitchelton-Scott provided the team bus, as many other World Tour teams have for their respective nations. The blend of club and country offers an odd aesthetic; Australia’s riders even have different helmets, reflecting the various sponsors of their trade teams.

McGee has a final chat with his squad, but there are no rousing words of motivation. “This does not change anything for us,” he says of the late course revision. “If anything it plays to our strengths.” Outside the bus, Jones, having returned the inflatable kangaroo, exudes an aura of calm. “There is no point telling them what to do,” he says. “They’re the ones who have to do it.”

The race rolls out 10 minutes behind schedule. McGee follows in the team car, while support staff scatter to different points of the route to offer bottles, feed bags and information. On the team bus, Jones has a live stream on one phone and is providing updates to the team WhatsApp group on another. Once an initial breakaway has formed, the commentator advises that, right on schedule, “Dennis moves to the front.” Jones reacts with a yell that reverberates around the bus: “Game on!”

The rain becomes heavier; the conditions are so bad that the helicopters which usually provide television footage have been grounded. “This is going to be such an epic day,” says Jones, with boyish enthusiasm. Earlier, McGee had been unperturbed by the weather. “These blokes don’t care,” he says. “If it’s rainy, put a jacket on. If it’s windy, put your head down. These are hardened, battle-ready bike riders. The weather is not an issue.”

“How the mighty have fallen”

As the peloton enters the Harrogate circuit after four hours on-course, Dennis becomes the first Australian rider to abandon. “We are on track,” says McGee. “We completed the first half to plan, and the stage is set for a big finish.”

The team car convoy is ordered by UCI’s country rankings; Australia, in ninth, are well behind the back of the peloton. McGee makes up for his lack of visuals by monitoring a live feed and the WhatsApp group – an impressive feat of multi-tasking as he speeds around the winding circuit – while a mechanic in the backseat relays orders to staff via radio. At one point McGee’s concentration is interrupted by a phone call from his son in Australia. “I’m just a little busy right now,” he offers apologetically.

The downpour is unceasing. “It has not stopped raining all day,” says McGee, dry inside the team car as his riders endure the conditions. Despite the adverse weather, the circuit is lined with spectators. “It is like a Tour de France day in July,” the coach observes. “Except it’s wet and they have their wellies on.

More Australians drop as the kilometres tick down, but McGee is unconcerned. “We are burning them in the right order.” Suddenly the coach spots Clarke on the road ahead, distanced from the back of the peloton. “Fuck,” he yells. Clarke’s departure from the race with 40kms remaining was not part of the plan. “I got a hunger flat,” the rider explains through the car window. McGee regains composure: “We’ve still got a few cards here.”

When Haas drops a kilometre later, just two Australians – Matthews and Haig – remain in the front group. The team’s prospects have swiftly diminished, but while the duo is in the race a medal is still possible. “It is pretty much all mental from here – you just have to back yourself,” says McGee.

With three laps to go the race has become a battle of attrition, and barely a quarter of entrants have survived. When two riders attack, McGee ponders changing the colour scheme from yellow to red, but decides to keep it at “be careful”. A trio then launches from the peloton to join the breakaway. “It’s done,” he spits, after the escapees establish a 30-second advantage. “We don’t have the numbers to bring it back.” McGee is visibly deflated. “There is nothing we can do but sit and hope that another country chases.”

Haig cracks with 18kms to go, while highly-rated Mathieu van der Poel suddenly falls back from the breakaway. The favourites are dropping like flies; Julian Alaphilippe is another to go. “How the mighty have fallen,” says McGee, stunned by the number of big names who will not be making it to the finish. When Matthews loses contact with the chase group, with several kilometres remaining, Australia’s medal hopes are extinguished.

The race is ultimately won by an unheralded 23-year-old Dane, Mads Petersen. Watching the sprint finish on the tiny screen in the team car, McGee is in disbelief. “This sport, hey? Brilliant, isn’t it.” Matthews rolls across the line in 24th place. Of the eight Australians who began the race in Leeds almost seven hours earlier, he is the only one to finish.

“How’s that for team culture?”

Back on the bus, the team are enjoying post-race pizza as they swap notes about a tough day in the office. “That was,” Haas says, “an experience.” After completing his media duties, Matthews arrives looking shell-shocked and immediately heads for the shower. He emerges from the steam 10 minutes later, still bearing a vacant expression. “I tried to attack on the last lap, and all of a sudden I was going backwards rather than forwards,” he says.

Once the bus arrives back at the accommodation, McGee immediately starts debriefing. Most of the riders have a beer in hand, for some their first alcoholic beverage of the year. The team take turns reflecting on their individual performances, in the order they exited the race, before others add commentary. Docker does not mince his words: “It was fucking brutal.

The tone is broadly positive; the riders feel there was little they could have done differently. McGee encourages constructive criticism, listening intently as Clarke outlines the challenges they faced receiving food from the roadside. “Is there a way we can do that better next year?” he asks.

The team ponder how to overcome the conditions. “Every single person was cold,” says Haig. “It is not a coincidence that a Scandinavian won.” McGee suggests “there’s no preparing for a day like that”, but Jones is more pensive. “You can say it is down to the weather, but that’s merely a problem we haven’t solved,” he says. “Yet.”

Just like the prior evening, attention finally switches to Matthews. “I want to say thank you,” he says. “Last night we outlined a plan, and today we executed.” Matthews may not be a typical leader, but his teammates are transfixed. “It was miserable out there today, but I did not hear one person complain. We stuck together – how’s that for team culture?”

The other riders applaud, but Matthews is not finished. “We didn’t win, but we tried our best. Win, lose or draw, we have had an awesome day.”